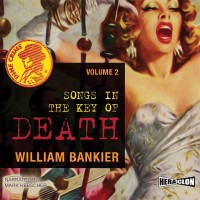 Songs in the Key of Death, Dime Crime. Vol. 2

Więcej
"Songs in the Key of Death," an anthology of music-infused crime stories by acclaimed author William Bankier. For over thirty years, starting in the 1960s, Bankier's love affair with music mixed with his hard-boiled crime stories to produce some of the most exhilarating and dramatic crime fiction of his generation.

Many of Bankier's best works originally graced the pages of classic pulp magazines like "Alfred Hitchcock" and "Ellery Queen Magazine," where Ellery Queen himself declared, "No one in the genre writes about music better than William Bankier." In Bankier's stories, among the notes of jazz and classical music, murder comes silently in the dead of night, asking the reader to turn the page and enter a bar where the patrons demonstrate Bankier's finely tuned ear for the lyrical, almost musical way, people speak--where fear is a killer.