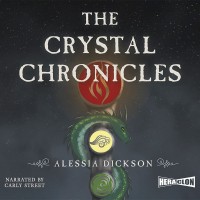 Więcej
The Human Race Is In Danger

Sixteen-year-old Alyssa Brooks is a high-school outcast who doesn't realize that she's living in a world where magic is very real and a dire threat to anyone not possessing the power to harness it.

But everything changes when Alyssa moves into Magnorium, a school for strange supernaturals called Elementals. As Alyssa adjusts to this new life, she learns of the Society, a powerful group of Elementals dedicated to cleansing the earth of its mortal population.

Alyssa soon discovers her own truth and power and becomes something greater than she could have imagined – or the Society could have feared. As the only ones brave enough to stop the Society, Alyssa and her three friends set off on a journey, with the future of humanity hanging in the balance. Will Alyssa be strong enough to carry the burden of the world, or will she break under the strain?