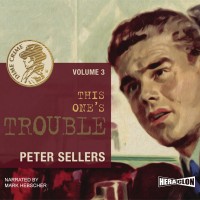 Więcej
This One’s Trouble offers a collection of some of the best hard-hitting crime stories from acclaimed writer Peter Sellers. Hailed as "one of the key figures in the Canadian mystery renaissance" in the pages of Ellery Queen Mystery Magazine, Peter Sellers' entertaining and offbeat crime fiction stories have appeared in every major mystery magazine including Mike Shayne Mystery Magazine, Alfred Hitchcock Mystery Magazine and Hardboiled. In This One’s Trouble, readers will discover characters that live in a world of shattered dreams and failed plans, where the banality of evil is found in everyday life. "A typical Sellers story there is usually one bad decision made, and on that hangs the plot—as well as the perpetrator."—Don Hutchison, acclaimed author of Great Pulp Heroes. Included here are some of his best work, including stories "Avenging Miriam" which won the 2001 Ellery Queen Readers Award and the title story which was nominated for the Arthur Ellis Award in 1992.